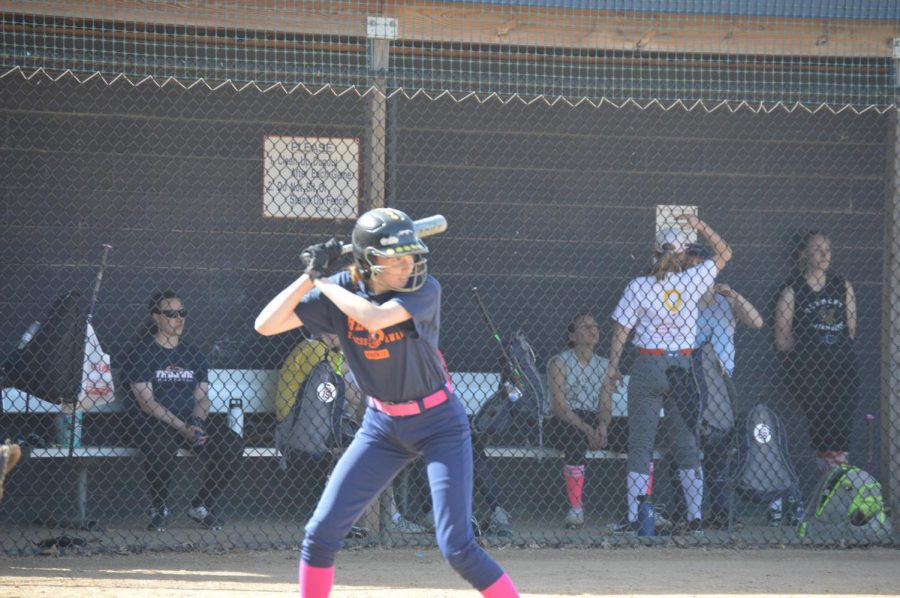 Julia Zakovitch awaits a pitch during practice on April 24, 2019. “I admire Julia’s dedication to herself as an athlete,” said softball head coach Maria Mrowzowksi. (Broadcaster/Allie Balcomb)

Zakovitch’s immense hard work of each sport, the fierceness she puts into everything, makes her the athlete she is.

The freshman has been playing basketball since kindergarten, and softball since the age of eight.

Her “quiet confidence” shines through because of her hard work and dedication.

Her parents have been an important role behind Zakovitch’s dedication to athletics.

“My dad was always pushing me to go outside and shoot around, or dribble the ball.” Julia says about her dad’s involvement with her basketball influence.

Her mom was Julia’s softball coach up until this year, the start of high school. Zakovitch said she was always supportive.

Julia, as a varsity player, never really felt uncomfortable about playing with older players. She said she knew there were people behind her to lift her up, which made her not have any fear of letting any of her teammates down.

However, she’s realized senior night made it hard to realize some of your teammates were leaving. The season makes it for varsity players to take that special night of the season more to heart.

“You’ve become close, you’re on varsity with them everyday.. It makes it hard to see them go,” says Zakovitch.

As a varsity athlete, she never had much pressure. On the court, nor on the pitcher’s mound. If she did, she never showed it.

The freshman maintains her composure greatly. “It’s all mental. Half the time you give yourself pressure,” said Zakovitch.

Zakovitch is a well liked teammate.

Her teammates know she’s down to earth and kind-hearted. Adding in the fact that she makes sure she’s encouraging them.

Head Basketball Coach Moore says, “Julia comes across as a quiet confidence..” Julia is a hard worker, which is often noticed. “..there’s never a time where I’m concerned about her effort level add into that, how hard she works on everything. You don’t wake up that way.”

Zakovitch is a tall, kind-spirited person. However, in sports, it’d be hard to tell.

Her demeanor when she runs in cross country, is on the pitcher’s mound and batting, and when she is on the basketball court, is fierce determination.

Each of her coaches observed that characteristic about her, as have her friends.

Head Softball Coach Maria Mrozowski said, “Her composure on the mound helped to give the team confidence,” said Mrozowski. “..Her ability to stay cool, calm, and collected has been immeasurably important.”

Mrozowski said that she’s learned that when Julia has a job to do, the freshman will make sure it gets done.

Each of Zakovitch’s coaches know that.

They know they can rely on her composure and hard work she contains.

Maintaining composure is part of who Zakovitch is. She’s always there to encourage her teammates on and to lift them up. And that is greatly valued by her friends and colleagues.

He knew the trust was there.

“I admire Julia’s dedication to herself as an athlete,” said Mrowzowksi. “She works very hard in order to be successful. I’ve seen her do whatever her coaches ask of her, trusting in their efforts to help her become a better athlete.”

Julia’s hard work, composure and kindness are often noticed by many, and all agreeable that they are valuable traits about her.

“If sports were easy, everyone would do them,” says Julia Zakovitch.

And those traits cromake her the athlete she has become.