Over the past few years, Cocoa Packs of Hershey has worked tirelessly for families who cannot afford adequate amounts of food. This time of year, their focus shifts to another facet of giving: gift-giving.

In partnership with Toys for Tots, Cocoa Packs will be the official gift distribution center for Derry Township for the second consecutive year. Toys for Tots’ goal is to provide kids who are less fortunate with gifts for Christmas, so Cocoa Packs is working to distribute the toys to children in Hershey and Hummelstown. 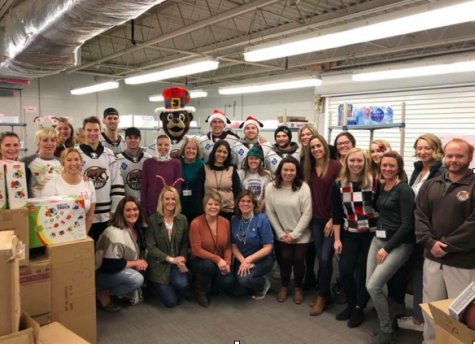 Hershey Bears hockey players and other volunteers from the community pose for a photo at Cocoa Pack distribution on December 6, 2018. Many volunteers worked for 10 to 12 hours to ensure that local children had the best Christmas possible. (Submitted by Cocoa Packs)

Collection boxes were located at all Hershey Schools, Chocolate Avenue Grill, Smoked Bar and Grill, and the Goddard School. The donations began on November 1 and the first distribution day was December 6.

Along with boxes being distributed around Hershey, Hershey High School’s National Honor Society members participated by collecting gifts for teens.

In 2017, 550 children in the Hershey area received toys, and the organization’s goal this year is to give even more.

The next round of distributions will be on December 20, and Cocoa Packs is especially in need of gifts for boys ages 9-12.  The Cocoa Packs website has a list of toys needed, and all the toys can be dropped off at donation boxes around Hershey.

“Toys for Tots makes it possible for everyone to have a pleasant Christmas,” said Jacob Drexler, son of Christina Drexler, the President of Cocoa Packs.