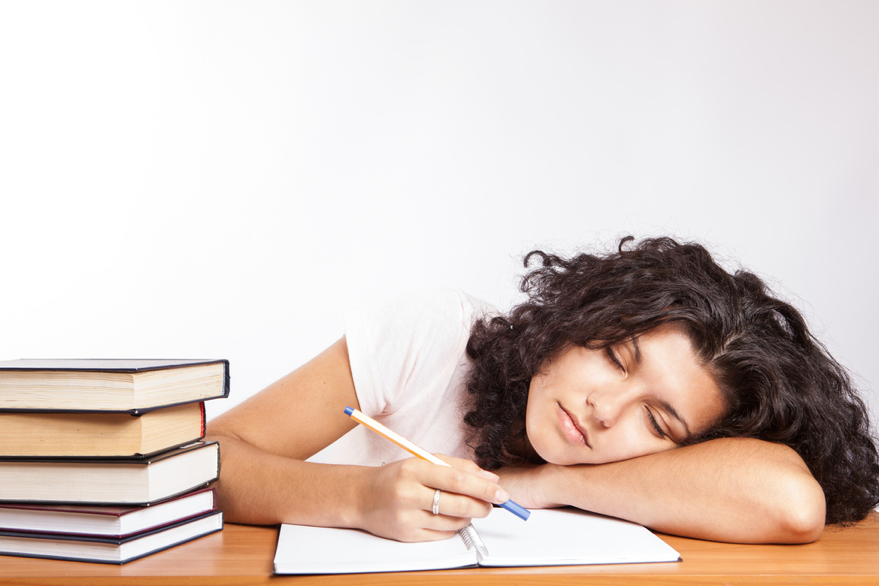 Shown here is a teen so tired she fell asleep during studying. In multiple other schools around the nation, students’ academic performance has gone up with the later start times. (CollegeDegrees360/CC BY-SA 2.0)

Students are constantly wishing to gain more sleep on school days, and now there is scientific evidence behind their pleas.

According to the 2014 School Health Policies and Practices Study, 93 percent of high schools in the U.S. begin before 8:30 a.m. High schools nationwide start their days at drastically early times, causing students to be deprived of the sufficient amount of rest their body needs. Sleep is essential for teenagers’ physical and mental health.

Due to the onset of puberty, students’ hormones undergo a change during their teenage years which cause them to naturally want to stay up later into the night. This biological shift peaks during students’ high school years. According to Scientific American, the shift is caused by a change in melatonin to the brain and normally begins around age 13, gets stronger by age 15 and 16, and peaks at ages 17,18, or 19.

Therefore, teens find themselves naturally staying up until extreme hours of the night and sacrificing their amount of sleep. Consequently, when teenagers are forced to wake up early the next morning, they physically feel like it is the middle of the night. Students then start their day in a fog for the first hours of school and may have trouble concentrating.

Along with feeling drowsy during school hours, an insufficient amount of sleep can have serious repercussions. According to the American Academy of Sleep Medicine, sleep deprived teenagers are more likely to be overweight, not engage in daily physical activity, and become interested in unhealthy and dangerous behaviors such as drinking, smoking tobacco, and using illicit drugs.

Students are often at risk of increasing their stress and anxiety if they are functioning on a small amount of sleep. The American Academy of Pediatrics (AAP) said, “An increased prevalence of anxiety and mood disorders has also been linked to poor quality and insufficient sleep in adolescents.”

In addition to sacrificing students’ mental health, the AAP also found insufficient amount of sleep can lead to an increased use of stimulants (caffeine, prescription medications) to combat the effects of sleepiness on academic performance.

The recommended amount of sleep necessary for teenagers while they are growing and developing is between 8-9 hours; however, according to the The Center of Disease Control and Prevention (CDC), less than one third of U.S. high school students achieve this goal

Despite the fact that there are a variety of factors impeding teenagers’ sleep including lifestyle choices, biological shifts associated with puberty, and academic demands, early school start times are the main contributor to insufficient sleep among teens.

Districts nationwide are beginning to make a change. A community in Wake Forest, North Carolina operates their public schools by using a three-tier system where each tier begins at a different time. The majority of the Tier I schools begin at 7:30, Tier II schools at 8:15, and Tier III at 9:15. Tiers I and II are composed primarily of middle and high schools while Tier III is composed entirely of elementary schools. A study was conducted on the Wake County Public School System to analyze the relationship between the Tiers’ later start times and the students’ test results.

From the Wake County data, Education Next found that delaying school start times by less than one hour, from roughly 7:30 to 8:15, increases standardized test scores by at least two percentile points in math and one percentile point in reading.

If the statistics are showing many advantages to later school start times, what’s stopping communities from making a change?

According to the CDC, “Common barriers to delaying school start times include concerns about increased transportation costs because of changes in bus schedules; potential for traffic congestion for students and faculty; and difficulty in scheduling after-school activities, especially athletic programs.”

There are simple solutions to combat these concerns. The “bus issue” can be worked out by simply reversing the order between schools’ high school and elementary stops. Younger students are more energized in the morning compared to older ones; hence, it is apparent that they should begin learning earlier than their teenage siblings.

Although later school start times come with many new adjustments, the benefits outweigh the negatives. Districts too afraid of committing to a large change can begin by modifying their start time by a small amount. Even delaying school by as little as a half an hour has a big impact on the teenagers’ abilities to stay focused and perform better throughout the day.

Due to biological factors, students are more prepared and enthusiastic to learn later in the day compared to earlier. Schools nationwide are looking into adjusting their schedules to make it more effective for their tired teens.

“Once these school districts change, they don’t want to go back,” said Kyla Wahlstrom, director of the Center for Applied Research and Educational Improvement at the University of Minnesota.