Drones prove to be useful, but concerns remain 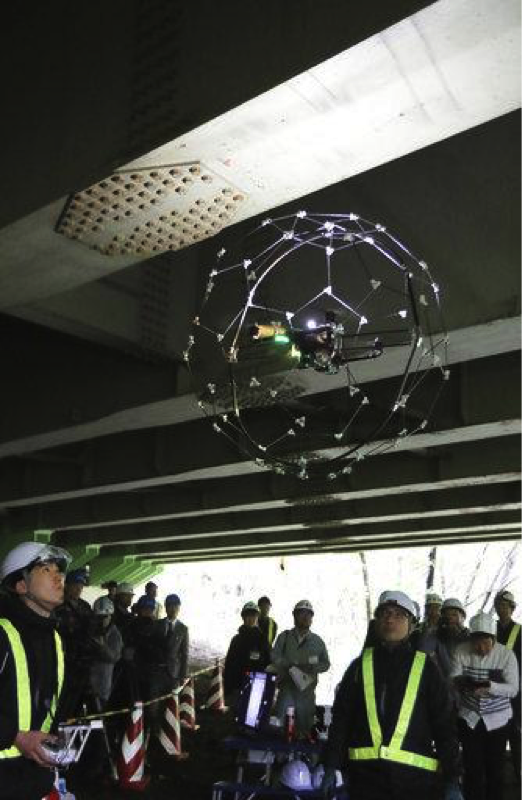 A drone lights up and takes photos while flying in a dark and narrow space under a bridge at Sendai City, Miyagi prefecture on May 16, 2017. Kazunori Ohno, Japanese Assistant Professor of Tohoku University and his team developed a drone which doesn't fall even colliding with something like bridge. Drone is guarded with football-shape device (96cm diameter, 2.6kg), made of strong and special material, can fly stable even it bumping into a building or other things. ( The Yomiuri Shimbun via AP Images )

A device as small as the palm of a human hand is the subject of a heated debate.

Drones can perform a multitude of tasks, the most popular use being aerial photography. According to Dallas News, photography accounted for 34% of all commercial drone use in 2016. Additional uses of a drone are for home security, hunting, shipping, and agriculture. Commercial drones come in many different shapes and sizes, most ranging from 560 to 1120 millimeters.

The Federal Aviation Administration says more than 30,000 drones will be in the air by 2030. In addition, the global market for drones is expected to pass $22 billion by 2022. With some drones costing as little as $499, the remote-controlled aircraft is now more affordable than ever.

Everyday citizens aren’t the only ones with access to these machines. Pending a bill, police in Connecticut will be allowed to use drones “outfitted with deadly weapons,”according to CBS news. Currently, North Dakota is the only state that allows its police to use drones with any weapons at all.

Even US soldiers are putting drones to use thanks to drone supplier Aerovironment. A baseball-sized device known as “The Snipe” will provide aerial video to give those in combat a better understanding of their surroundings.

However, the commercial use of drones has led to discussion that they are a privacy threat. Over the past five years, there have been numerous incidents involving drone users being accused of invading privacy. In the UK alone, there were more than 3,456 drone related incidents in 2016. Most of the reported incidents were invasions of privacy.

Amidst concerns that drones are being used to spy on unsuspecting neighbors, the US recently introduced the Drone Privacy and Transparency Act of 2017. The new legislation would require drone users to provide specific information about where, when, and why the drone will be flown. Drone pilots are required to keep their drone below 400 feet, away from crowds and airports, and in their line of sight, Wired says.

Whether on land, carrying passengers in the sky, or in the sea, there’s no telling what’s next for drones. The future of these tiny machines promises to not disappoint.