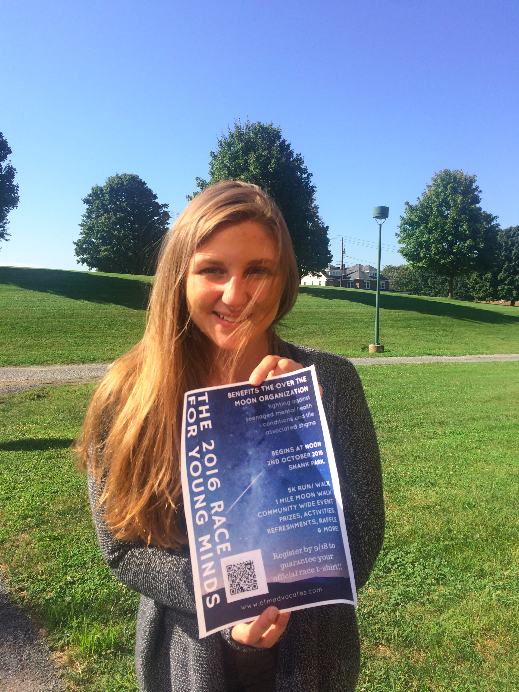 On September 23, 2016, HHS senior Rachael Schirato poses with a flier for the Race for Young Minds at HHS. Schirato, with the help of many others, organized this walk to benefit her mental health awareness non-profit, the Over the Moon Foundation. (Cara McErlean/ Broadcaster)

For many teens affected by mental illness, suffering in silence is daily life. But that does not always have to be the

The Race for Young Minds 5K will be held on Saturday, October 2, 2016, at Shank Park. All proceeds from the race will go towards the Over the Moon Organization, which raises awareness about teen mental health.

The day will include a 5K race at 12:00 pm as well as a one mile “Moon Walk” at 12:45pm. There will be food, refreshments, prizes, games and activities, and a raffle throughout the day.

There will also be guest speakers such at Hillary Miranda, the founder of “This is My Brave” mental health organization. The cost to register is $25 for the 5K race and $22 for the one mile walk.

The Over the Moon Organization is the budding project of Hershey High School senior Rachael Schirato. Schirato, who has been personally affected by mental health struggles, wants to make a difference in the way society views teens with mental illnesses.

Mental health, Schirato said, is often considered taboo and not discussed as openly as it should be. The Over the Moon Organization aims to raise awareness about teen mental health, and provide mental health education, support, and resources to teens who need it. It is also striving to raise funds to support research and treatment methods.

According to the National Alliance on Mental Illness, 20% of youth aging from 13-18 years old live with a mental health condition. In addition to that, half of all lifetime cases of mental illness begin by age 14.

“Since mental illnesses are often ‘invisible’, meaning they manifest themselves in more subtle ways than a physical illness would, they can be difficult to recognize,” Schirato said.

Schirato believes that speaking openly about the topic of mental health will make it easier for teens to recognize their issues and get help.

“Mental health is not a taboo topic,” Schirato said, “We should be able to talk about it.”

Ever since the Over the Moon Organization obtained its non-profit status this July, it has been gaining community support. They have had tables at the Farm Market and National Night Out in Downtown Hershey, where they find volunteers and get their message heard.

According to Schirato, the path towards becoming an official non-profit took a large amount of planning and making connections. Tracy Creer, a Hummelstown based lawyer, was an integral part in creating the Over the Moon Organization. Schirato has also found the support of local psychologist Kerrie Smedley, who is on the board of the organization.

With the support of the community, Schirato hopes to continue the Race for Young Minds annually.

“A big part of mental health is knowing you are not alone,” Shirato said.