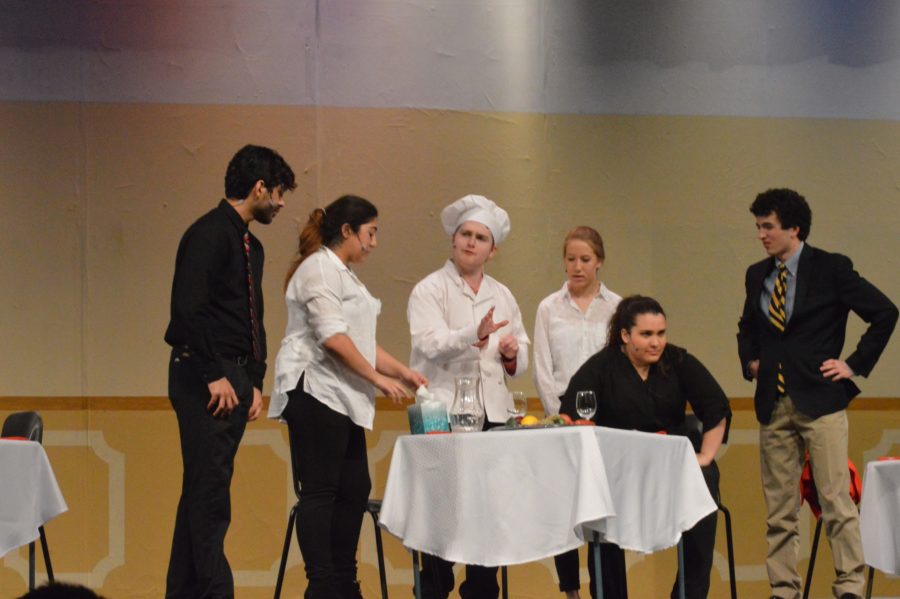 The show cast acts in the production of The Blind Date on April 28, 2016. The show consisted of many hilarious actors and actresses with numerous quirks to each of them.

The two plays brought many laughs and snickers for the audience. The Blind Date, for example, featured a nerdy copy editor (played by Anton Aluquin) going on a blind date with his boss’s daughter (Cara McErlean). The date happened at a less than successful restaurant, The Golden Shoe, run by a hopeful manager (played by Patrick Gavazzi).

The rest of the staff were all full of quirks. Paxton Zeis played the arrogant head waitress along with Malia Fellenbaum, a waitress in training. Additionally, Patrick Starner made an appearance as the haughty chef, who hates small talk and restaurant critics. Throughout the play, hilarious, and wacky scenes left the audience teary eyed.

The second play, called the Banana Nut Split, featured Mama Cavalini’s, a very successful restaurant. Mona, played by Syrena Torres, is the owner of Mama Cavalini’s. When all of Mona’s staff, except for the janitor, played by Kellie Drobenak, all bails on her, she gets stuck in a huge dilemma. She decides to close, but at the last minute a young man named Bradley Stumble, played by Thomas Perry, walks in.

He is planning on proposing to his girlfriend Susan, played by Karleigh Moritz.

However, he still has not told Susan about his split personalities that show up in nervous situations. The Banana Nut Split produced many laughs as Bradley Stumble switches from a cowboy, detective, animal rights activist, and more.

Thanks to the the hard work of director Lisa Balanda and the cast and crew, the HHS theatre department can now end the school year with memories of a humorous and lively production. The Blind Date and The Banana Nut Split showed how one simple date can go from bad to worse, with a few laughs along the way.

Great job to the cast and crew, the 2016 spring play was a clearsuccess!