When approached by administration in the spring of 2021 to see if she would be interested in becoming Hershey High School’s first Social and Emotional Learning Coach, Jaime Bean felt very lucky.

The former health teacher frequently used SEL-driven topics in her lessons to help students be able to recognize and handle emotions. Bean has been very passionate about SEL for a long time, saying, “it’s my favorite thing, I learned about it for fun on the side like a nerd.”

So when she was asked to take this new position, she was “very very excited.” Almost immediately, ideas started formulating – lessons, outreach to students, even a physical space that communicated SEL’s core beliefs.

How did the pandemic necessitate SEL at DTSD?

The decision in spring 2021 stemmed from one simple tipping point: the fractured Hershey High community.

With the emergence of COVID-19 online schooling, as with anything new, problems arose. After over a year of not being together as an entire school, the community needed serious healing.

The administration recognized this, and knew it was time for a change. Strong relationships are what hold a community together, and no one recognizes that more than Dr. Jeffrey Smith. As principal of Hershey High School, Smith knows the community feel of a school building is vital for safe learning. However, the pandemic overturned that feeling, causing students to feel isolated in their homes. “[There were] two parts of the community that I wanted to focus on. One was the overall school community,” Smith said, “and then also our relationships.”

To do so, the administration had to come up with a plan. Through the incorporation of SEL, the administration believed working on interpersonal relationships would contribute to the healing of Hershey High School’s student community. First, they reached out to Bean to lead the program. Then, the school established an SEL team consisting of administrators, teachers, and counselors, led by district superintendent Dr. Stacy Winslow and assistant to the superintendent Dr. Aaron Shuman.

Assistant principal Laurie Wade is also a member of this team. The team tries to incorporate student feedback into their meetings. “One of the things that came out of SEL lessons was that students wanted to see announcements. So as the SEL team, that was brought up,” Wade said, “It’s action-oriented.” The team was able to get the daily announcements onto the TV in the cafeteria, following student feedback.

What is the goal of SEL?

Bean has jumped into the SEL program with enthusiasm. The school’s new community periods that take place every few weeks and include a modified schedule to fit a short period of announcements and have allotted time for SEL lessons. Bean leads these from the library Think Tank with a small sample of students, nicknamed the “Bean Team,”  to represent the student body and to walk through how each classroom can discuss the specific SEL lesson of the day.

One way she’s branched out from just speaking on the curriculum is pioneering the implementation of an SEL lounge. Bean said, “[The lounge] is still a little bit of a work in progress, but the goal is that we would have an SEL lab, like a place where we could come if we needed to take a little bit of a mental health break or if you need us to talk with someone or just have some space to yourself.”

Aside from the lounge, another short term goal she holds is to introduce SEL activities during lunch. With the new schedule of longer lunch periods this year, students have a lot of time after they finish eating, and Bean wants to take advantage of the extra minutes.

For Bean, there is one overarching goal in her projects: connection. Health and wellness are tied to how we feel in our relationships. “Our relationships, [if] they feel positive and fulfilling and nurturing to us, have the ability to really build a strong foundation in our lives.” said Bean, “And so I have tried to learn a lot more about it.”

SEL lessons will continue taking place in community periods, with Bean hopeful that there will be one or two a month. The most recent two lessons were January 26th and 27th, each teacher-led, which focused on self awareness and the introduction of the mood meter.

“It’s basically the quadrant of four different colors and assessing where our feelings are in that moment in regards to energy and pleasantness,” Bean said.  She explained that often “we judge our emotions, but really the whole idea of self-awareness is to just be curious about it.”  The most important thing is to “not to judge what’s good or bad.” 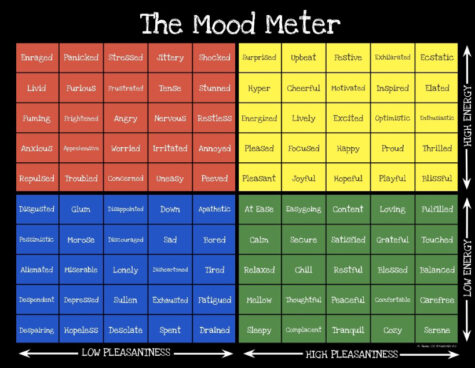 Where did DTSD get the SEL curriculum from?

SEL (or Social and Emotional Learning) is a program that has existed in the background of the core curriculum at Hershey High School for years, implemented into Health in high school and COCOA class in middle school, before the consideration to move it to the forefront of learning.

The majority of the curriculum used in SEL comes from an organization called the Core Project and the Collaborative for Academic, Social, and Emotional Learning (CASEL). This curriculum was introduced in the first few lessons of SEL as an introduction to how the lessons would move forward. CASEL’s goal, according to the website, is to “make evidence-based social and emotional learning an integral part of education from preschool through high school.”

CASEL’s core beliefs come from what they refer to as the “CASEL Wheel.” In the CASEL Wheel, (shown below) there are 5 parts: self-awareness, self-management, responsible decision-making, relationship skills, and social awareness, according to the CASEL website. Each part of the wheel aims to work on pillars of healthy relationships. 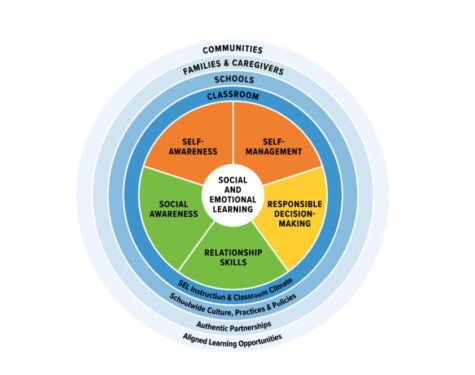 The rings on the outside of the circle show SEL’s effects on the immediate and larger community. These lessons begin in the classroom, and then make their way into the school community with practice and school policies. Using what students have learned in their families and communities can then lead to strong relationships with other people and more authentic opportunities for learning and careers in the real world.

Each lesson, Bean tries to focus on one or two aspects of the CASEL wheel. One lesson she led a group discussion on self-awareness and self-management, using a collection of values for students to choose from to describe themselves. Another lesson before winter break, students made cards for elementary students and staff to help work on relationship skills. Each lesson has a teaching portion and then time for students and teachers in each classroom to discuss amongst themselves, with Bean and a small sample of students acting as an example over Zoom.

How are students reacting to SEL?

Although the implementation of SEL and the Community Period schedule is in its early stages, Hershey High School students have strong opinions about it.

Students are having a difficult time connecting with each other over Zoom. Senior David Green likes the idea of the lessons, but hopes the school can make lessons more student-friendly.

“I think the idea behind the lessons makes sense, but [having them on] Zoom is inherently harder to connect with people. That made it trickier,” Green said.

Green believes the awkwardness over Zoom could also be changed if students were more willing to talk to each other. He has study hall during the community periods and, in his case, the randomized group of students did not feel comfortable sharing what some might consider vulnerable topics with each other in the lessons.

Sophomore Ling Wu agreed. “Community periods are a good idea in theory, however, it is not executed well because most students do not participate,” Wu said. In her classrooms, students rarely participated even when pushed to do so by their teacher. Participation levels are unfortunately harder to control. Green mentioned that it did get better as the week went on, but it was still frustrating.

“People weren’t really open to sharing anything,” Green said, “until the last day.”