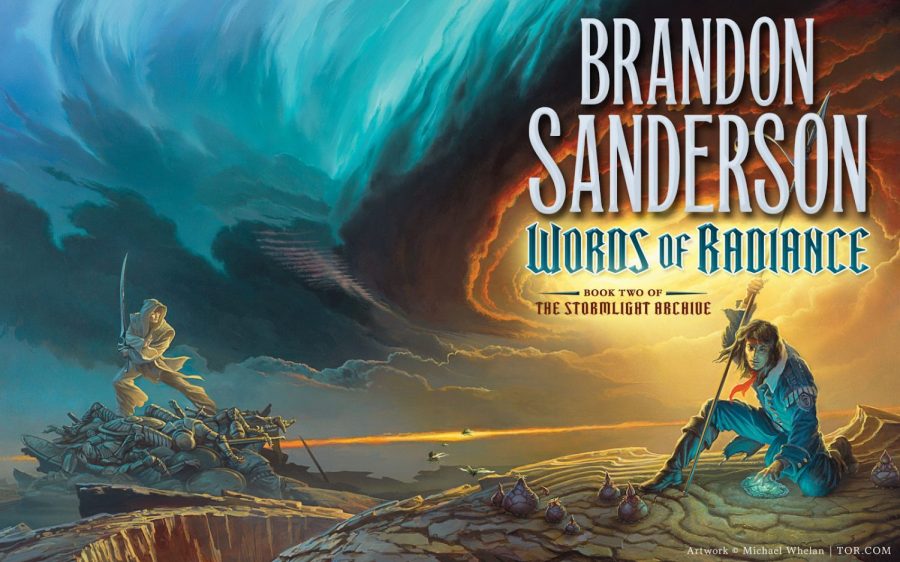 Pictured is “Words of Radiance” which is part of the Stormlight Archive series. Author Brandon Sanderson is a fantasy and science fiction writer from Utah. (Tor Books)

Being quarantined over the summer is leaving many with a lot of free time on their hands. A great way to pass the hours is sitting down and reading a good book. With so many free hours ahead, it is the perfect chance to embrace the world of epic fantasy and begin a long series. The Stormlight Archive by Brandon Sanderson is a wonderful fantasy series to occupy your long summer hours.

This series currently has three books out, each considerably thick. The story follows the adventures of Kaladin, Shallan, and Dalinar in a fantasy world full of magic, monsters, and more. It all begins when a race of humanoid creatures sends an assassin after a human king who was attempting to establish a peace treaty between the two races before he died. This event started a war between the two races, and the series takes you through the events of the war, the secrets behind its circumstances, and the individual stories of each character.

Each book explores the interconnected stories of the war and the individual characters. So far, each book has put a focus on one of the main characters. The first book in The Stormlight Archive, titled The Way of Kings, focuses on Kaladin. Kaladin was raised to be a surgeon, but life took a different turn. He became a soldier instead until eventually life took yet another turn and Kaladin lost his status. He became a slave instead, and his story focuses on how he survives the bad conditions a slave like him is put in.

The second book, Words of Radiance, focuses on Shallan’s story. Shallan is a young woman raised in nobility; however, her family was not exactly the picture of a normal noble family. Shallan has lost both of her parents when her story begins, and her family is on the verge of bankruptcy without their father. To fix this, Shallan’s job is to become the ward of the late king’s daughter, Jasnah. This will allow Shallan to get close to the woman, which will make stealing from the important scholar easier.

The third book, Oathbringer, focuses on Dalinar, the late king’s brother. Dalinar is a war general who has been tasked with figuring out a way to unite the fighting human kingdoms. Dalinar gets otherworldly visions that prophesy of a disaster is coming, and he somehow has to prove to himself and others that these visions are real. The visions tell Dalinar to “unite them,” and that becomes the man’s mission in life as the story continues.

(In order to avoid spoilers, those three character explanations describe each of the characters at the beginning of the first book, and not the events in their respective books.)

Each book is separated into five parts, and those parts are separated by the Interludes. Each book has at least 1000 pages, while the audiobooks are around 50 hours. The Stormlight Archive series is obviously a huge time investment, but it is definitely worth the time. The books are a beautiful combination of interesting and unique worldbuilding, deep character development, and a wonderfully intricate plot. It is a masterpiece of a series that has taken many, many years to plan, write, and publish.

The first book was published in 2010, the second in 2014, and the third in 2017. A fourth is coming out this fall, the official publication date currently being November 17, 2020. Its title will be The Rythm of War. This series is planned to have 10 books in total, with some branch-off novellas and short stories published along the way. There is currently only one stand-alone novella published outside the books, titled Edgedancer.

Brandon Sanderson’s Stormlight Archive is masterfully written and a perfect way to spend your summer. If you do not think you can invest in such a large series, however, you could try one of the author’s other, shorter books. The Mistborn series, Warbreaker, and Elantris are just a few examples. Brandon Sanderson also has some YA titles, such as his Skyward series, the Reckoners series, The Rithmatist, and more. If you’re looking for something new and fun to do this summer, any of these titles would be an amazing way to spend your time!