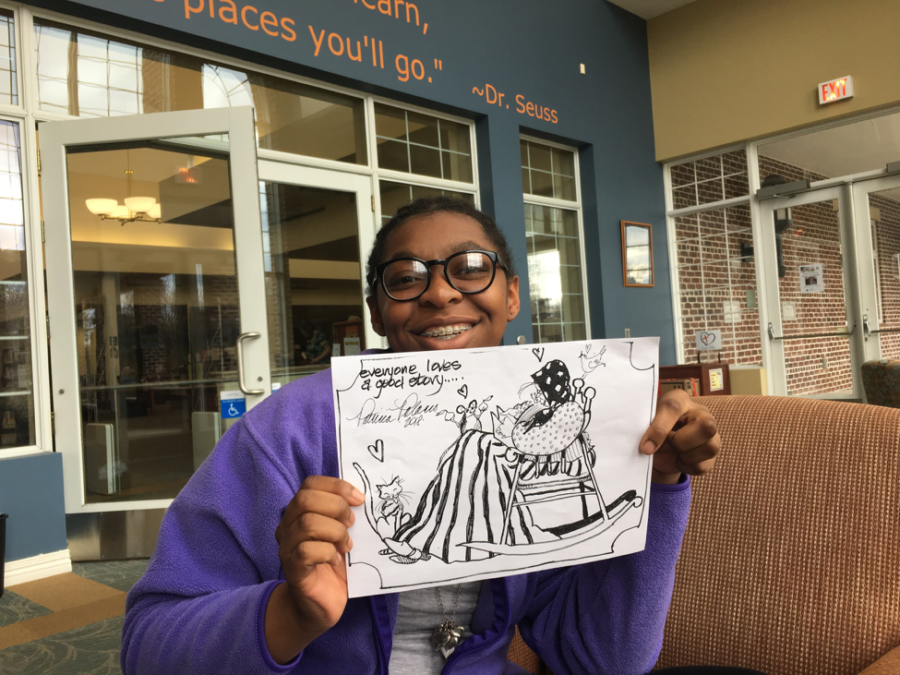 Audience member Savannah Paige holds up a copy of Polacco’s autograph on April 29, 2018. Paige attended the event at the recommendation of her friend. (Broadcaster/Abby Lee)

Although some may not have heard of this author and illustrator, she left a considerable impact on adults and children alike of the Hershey community.

Patricia Polacco was a guest speaker at the Hershey Public Library on April 29, 2018. She has written and illustrated hundreds of nationally recognized children’s books. The library’s Friends Children Program hosted the event as a preview for Polacco’s sessions scheduled at elementary schools around the Hershey area later in the month.

Polacco’s program was highly anticipated by local community members. A long line developed outside the event room filled with a combination of adults, parents, and accompanying children. At the start of Polacco’s speech, she allowed the young children to sit on the floor at the front of the room which quickly drew the audience in as whole.

Polacco began the event by talking about her experience in Hershey, explaining that she had been here about fifteen years earlier for a teacher’s convention. She mentioned Milton Hershey and joked about the smell of chocolate around town. Then, she delved into her personal life and shared stories about her background.

The audience was engaged from the beginning. Polacco was humorous and personable, and each audience member followed along easily. As she moved through her stories, she pulled out some of her most renowned books that referenced them.

Polacco explained the meanings and inspiration for her works like The Keeping Quilt, which is about a quilt passed down throughout her family. She brought out the actual quilt, but informed the audience that it is not the original quilt shown in the book. Rather it is the second generation one that she herself grew up with.

Both the children and adults equally admired it as Polacco spoke. In addition, Polacco described Thank You Mr. Falker, a book about the teacher that changed her life by identifying her learning disability.

Polacco gazed straight into the audience and said “you are looking at a learning disabled student”.

From that point, Polacco launched into her experiences with her disabilities and how she worked through the education system. She praised teachers and continuously explained her appreciation for the work that they did. This message about teachers stuck well with the audience who then mentioned it afterwards.

Allison Lin, an eighth grade audience member had read Thank You Mr. Falker before the event and enjoyed listening to Polacco live.

Lin said, “I just loved how she inspired people and how she made everyone realize to appreciate teachers more”.

Polacco’s books are used often in schools, but they also reach an older audience. The combination of her literature and illustrations is able to leave a strong message to any who read her books.

In the few weeks leading up to the session, Children’s and Teen librarian Rita Hunt said, “most of the phone calls we’ve been receiving have been from teachers, and librarians, and other adults”.

Those phone calls were made in excitement for the event, and the library visits reflected that. The library ensured that Polacco’s books were available before the event, since many people wanted to become more familiar with them before meeting her. The books circulated regularly with library patrons.

The effect Polacco had on the library audience will continue as the author performs at other venues in Hershey. The library collaborated with a few schools to bring Polacco here.

Carin Kaag, co chair of Friends’ of the Library Children’s Committee, said, “Laura [O’Grady, the library director] was the one who had the idea to bring her, so she in order to afford her, needed to bring in other schools”.

O’Grady sent out a message to schools in this area. Soon, Hershey and Palmyra Elementary responded, followed by Saint Joan of Arc. The library event was just a preview, so these students will be able to experience the entirety of the program and learn even more from Polacco.

For the public library, the impact of Polacco’s visit may even extend past her actual performance. People from all over Hershey and even neighboring areas attended. The hope is that this event and future ones will attract more people to the library in general.

Jim and Allison Lawruk and their daughters were among those who traveled from outside of Hershey to this session.

Allison Lawruk said, “We have never been to Hershey Library, it’s very nice…we usually don’t go beyond our library, but we definitely will”.

Although they are from Camp Hill, the Lawruks ventured to the Hershey Public Library for the first time to attend Polacco’s program. They had read some of Polacco’s books and were interested in hearing her speak live.

The library also held the Local Author Event the same weekend as Polacco’s session, and they invited local authors to showcase their work. Their work ranged in genre and target audiences. Anyone was able to explore this event.

Other authors featured in the past include Elizabeth E. Wein, the writer of Code Name Verity and Rose Under Fire. Roland Smith, a young adult author, has also been a guest speaker. The library was adamant to bring these authors to Hershey who then shared a compelling experience with their audiences. They will continue to bring events like this to the community in the future.