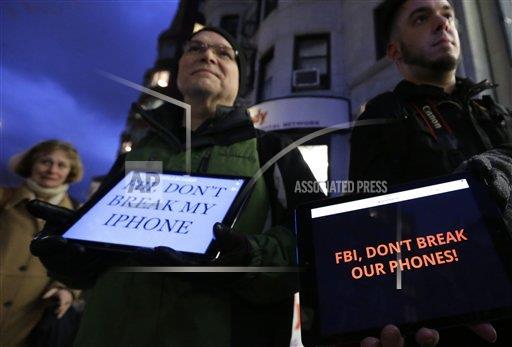 Demonstrators Peter Brockmann, of Northborough, Mass., center, and Chris Gladney, of Boston, right, display iPads with messages on their screens outside an Apple store, Tuesday, Feb. 23, 2016, in Boston. Demonstrators are expected to gather in a number of cities Tuesday to protest the FBI obtaining a court order that requires Apple to make it easier to unlock an encrypted iPhone used by a gunman in December's mass murders in San Bernardino, Calif.. (AP Photo/Steven Senne)

After all the chaos and gunfire, one locked iPhone stymied the FBI’s investigation.

On December 2, 2015, two shooters appeared in San Bernardino, California and opened fire. They were armed with .223 caliber assault rifles and semiautomatic handguns and killed 14 people and wounded two dozen.

According to the LA Times, since the attack, the FBI agreed to help local law enforcement gain access to an iPhone 5c that was found in the shooting’s vicinity and has been said to hold information linked to the shooting in December. The FBI had asked for Apple’s help on the project, but Apple declined.

Why didn’t Apple accept the offer to help the FBI?

Although hacking into the iPhone wouldn’t be difficult for Apple, doing so could possibly threaten millions of Apple users across the world. According to CBS news, “What Apple is saying is that if they create a broken version of iOS with a backdoor, then the Apple-provided version might fall into the wrong hands and be used on more than just one phone,” said cyberwarfare expert David Gerwirtz. “Backdoor” meaning iPhone users will become more vulnerable to information or identity theft if the broken version gets into the wrong hands. 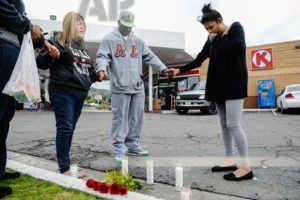 Francine Prieto-Estrada, left, leads Donald Pride and Elisa Castro in a prayer at memorial site for the gunned-down 12-year-old at Circle K gas station on Highland Avenue and Orange Street in San Bernardino, Calif., on Monday, March 14, 2016. The 12-year-old was shot and killed late Sunday, and a 14-year-old was wounded in the same shooting. (Rachel Luna/San Bernardino Sun via AP)

Additionally, although a reliable idea for the FBI would be to try different passcodes until typing the right one, the iPhone contains a security feature that self destructs all of its data after 10 incorrect passcode attempts.

After several appearances in court, the FBI recently unlocked the phone without Apple’s help.  The FBI are not sharing how they hacked the iPhone. The FBI only says they gained access thanks to aid from a “third party.”

John McAfee, cybersecurity expert on Libertarian Republic said the FBI knew how to gain access to the phone all along, and only asked for Apple’s help to establish a precedent.  The FBI denied these claims.

Although the FBI hasn’t released the information on how they unlocked the iPhone, there is much speculation on if the hack can be used on other iPhones. According to the Los Angeles Times, “It’s unclear whether the FBI’s hacking technique will work on other versions of the iPhone, though a law enforcement official who spoke on the condition of anonymity said its applications were limited.”

But what do the FBI plan to do with the information on the iPhone? According to the Chicago Tribune, investigators want to know if the iPhone contains important information that could be useful for other terror suspects and planned future attacks.