Column: Who Should Win the Best Actor Oscar? 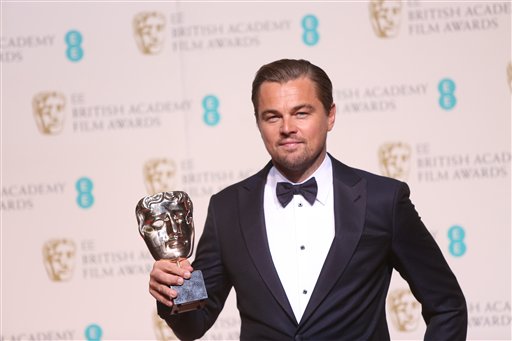 Actor Leonardo Di Caprio with his Best Actor award for his role in the film 'The Revenant' backstage at the BAFTA 2016 film awards at the Royal Opera House in London, Sunday, Feb. 14, 2016. (Photo by Joel Ryan/Invision/AP)

Actors and actresses are an essential part of the movie making process. The script, the direction, and the cinematography is useless without good acting. Now with the Oscars approaching fast, the question remains: which actor gave the best performance of the year?

I’ll start by diving in with number five.

Ranked as number four, Bryan Cranston was great in Trumbo as he uses a ton of improv and  plays his character with lots of energy. Unfortunately, Cranston’s performance was damaged by Trumbo’s disorganized story, and it’s “Oscar-bait” feel. Oscar bait is not always a bad thing, but it has to put the movie first. Cranston can never escape the fact that Trumbo puts its style over story.  He is very enjoyable to watch on screen, but it never really benefited the movie like a great performance should.

Matt Damon, ranked third best actor, was essential to the success of The Martian. Damon is alone on screen for the majority of the movie, and he manages to make every second enjoyable. Whether he was repairing an old mars rover, calculating how to grow food, or just listening to old 80’s music, Damon’s performance was always engaging. Damon’s greatest success, however, comes from how approachable he makes the character. His character was easy to relate and easy to watch. The success of The Martian was heavily dependent on Damon’s performance. Thankfully, it was one of the best of his career.

Michael Fassbender, coming in second, plays technology genius Steve Jobs in the biopic movie: Steve Jobs. Fassbender gave a highly realistic performance that showcased all sides of Jobs. His performance was technically flawless and was perfect in every sense of the word. Although Steve Jobs is somewhat over reliant on heavy dialogue sequences, this can not be blamed on Fassbender as he brings all the dramatic tension and energy that is possible to such wordy conversations. The only thing keeping Fassbender out of the top spot is what comes next.

Ladies and gentlemen, boys and girls of all ages, gather around and watch the tour de force performance that will finally get Leonardo Dicaprio his Oscar. Dicaprio gives the best performance of his career in The Revenant that the academy cannot ignore. Dicaprio plays such a complex role that every part of it had to be perfect, and it was. His ability to switch between two different languages, the way he conveys his emotions without any words, and the ferocity he takes into the action sequences come together to make the best performance of the year.